I thought I’d celebrate here by revisiting this shout-out from a certain Scottish wireless operator, really a wee bit of navel-gazing CNV fanfic I wrote myself in May 2012 for the original release, no longer available on the internet. 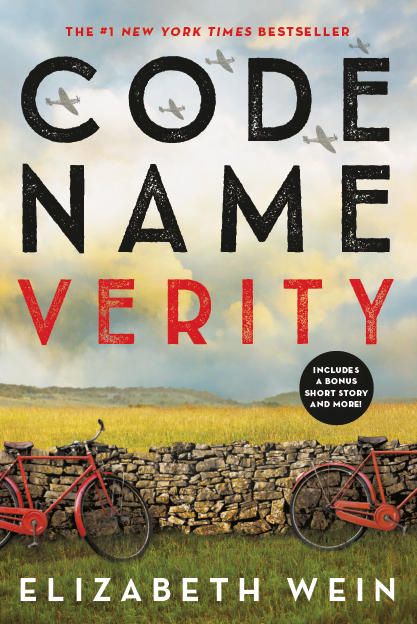 The virtual manuscript of Code Name Verity is something that has a weird shadow-life of its own in my mind. I loved playing with the idea of the narrators scrounging for paper and writing materials – of the physical existence of the “real” book, which ends up safely and lovingly preserved in the library of Craig Castle. So I thought I would give Verity herself a say in what is was like to write the book, because – well, deep in my heart, her thoughts about writing Code Name Verity are indistinguishable from my own. So here she is – Verity herself, on writing Code Name Verity, in her own words.

This makes me really rather proud to be British. We got battered with anti-Nazi propaganda during my Special Operations Executive training, and quite frankly I would be EMBARRASSED if the only thing my King and Country was asking me to do for the war effort was the “three Ks” – kiddies, kitchen, and kirk (all right, Kinder, Küche, Kirche – children, kitchen and church. You have to admit it translates better in Scots than in English). Fräulein Engel has assured me that the Three K’s are neither current nor Nazi policy, but she has also admitted that there is an astonishing thing called the “Cross of Honor of the German Mother” which is awarded to you if you have four babies. Or more.

But I could have done anything. I mean, maybe not to get a medal for it, but short of actually being a serviceman on active duty, I could have trained at and done any man’s job I’d wanted, because all the men are busy fighting. Of course I did train as a radio operator, but I could have been an aircraft mechanic, or a parachute packer, or worked in any number of factories, or learned to drive ambulances. If I’d been a nurse I might have been posted to the front lines when the invasion finally comes. I could have driven my own ambulance to the front. I have an older cousin who was awarded a Military Medal for driving an ambulance in the last war, in 1918.

I bet even the German women with four babies are working as field hands, just the way our Land Girls are. And I know that Germany’s most daring and accomplished test pilot, Hanna Reitsch, is a woman. Really, neither Germany nor Britain is as broadminded as the Russians. They let women fly fighter planes into combat.

Oh – I talk so high-mindedly, but all I’m really doing – all I’ll be remembered for – is this story. I know it is the only thing I’ll ever write – the only thing that matters. I feel as though all the writing I’ve ever done, all the school history essays, the tentative attempts at sonnets, the rambling letters to Mother and Jamie and Maddie, the dreadfully immature adventure stories and the earnest Dramatic Society plays, the brave, witty articles for the Maidsend Aerodrome Officer’s Club newsletter – all of it was only preparation for this – this tremendous manuscript I am writing now. It is meant as a confession but I want it to be as good as a novel. It is my one and only chance at literary perfection – I want it to outlive me. I want it to be my masterpiece – my Finest Hour.

I suppose I am fooling myself. But I wouldn’t be able to write it otherwise.

You can get a copy of the tenth anniversary edition of Code Name Verity here at Indiebound: